The weather station is in the garden of my home in Llansadwrn. It is an amateur station, but I use professional equipment and it is run to professional standards. Observations include rainfall, maximum and minimum temperatures in a Stevenson screen, grass minimum temperature, solar radiation and soil temperatures from 5 cm to 100 cm depth. Manual observations are made at 0900 hours GMT (UTC or Z), occasionally at 2100 GMT and other times when required, and include wet and dry bulb readings for calculating relative humidity, visibility, wind direction and force (Beaufort Scale), and present weather. Evaporation is measured by a Piche evaporimeter mounted inside the screen, and potential evapotranspiration by lysimeter set into grass. Soil moisture content is also determined. In addition, deposition of dust particulates and atmospheric depositions on grass of water (dew) and ice are made together with various phenological observations, and yield of grass, are recorded throughout the year.

The station is situated in a large garden consisting of lawns, vegetable plots, ornamental borders and mature broadleaf woodland. The house and gardens are part of Gadlys, a former country estate established in the 19th Century. The instruments used to record the weather are in an open part of the garden afforded average exposure for the area. Situated on a ridge in the south-east corner of the island it is rarely calm, the garden is most exposed to strongest prevailing winds from the south to west and the north-east while some shelter is afforded to winds from north-westerlies and rare south-easterlies. Rainfall observations are supplied to Natural Resources Wales and the UK Meteorological Office. Parts of the site are shaded early and late in the day although a spot has been found to measure global solar radiation.

The soil is a slightly acidic, we can grow Rhododendrons, and free draining stony brown earth. The soil is developed on a glacial drift overlying the local rock type called Môna complex schists.. The ground is generally slightly sloping to the south and eventually drains into the Afon Braint. The lands surrounding the garden and woodland are agricultural fields, of small to medium size bounded by stone walls and hedges. It is used mainly as pasture for beef cattle and sheep. Some cereals (usually barley and oats) are grown and are used mainly for cattle fodder. Grass growth is usually plentiful because of the moderate rainfall and temperatures; silage and hay is made to provide winter feed for the animals. The yield (net primary production) of grass on the weather station lawn is measured throughout the year as is the water content of the underlying soil.

The area is the most wooded part of Anglesey, mature broadleaved trees occur on rocky outcrops, and some wet areas, which have not been suitable for cultivation. In addition shelter belts border some fields and are unusual as they consist mainly of mature broadleaved species planted by the former estate. Planted tree species included sycamore, Norway maple, beech, ash, lime, elm, Scots pine and horse chestnut. The elm trees were affected by Dutch elm disease in the 1970's and most had to be felled in an attempt to prevent the spread of the disease. These measures failed and only a few scrub trees remain. The woodland was underplanted, by the former estate, with snowberry Sambucus albus var. Laevigatus and Rhododendron to provide cover for game birds. This is no longer practised and the cover provides a habitat for wild birds and other wildlife. 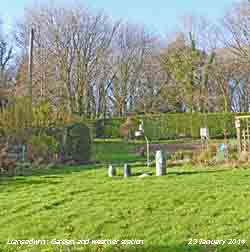 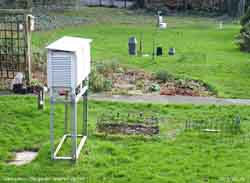 Exposed above grass is a minimum (spirit) thermometer, the bulb being set to touch a blade of grass usually between 2 and 5 cm above ground. In a bare soil plot bent stem mercury thermometers are inserted at 5 cm, 10 cm and 20 cm depths. Under grass are mercury thermometers, with bulbs embedded in wax within glass tubes, exposed in copper tubes at depths of 20 cm, 30 cm, 50 cm and 100 cm. Daily run of wind, and other readings, are taken using cup counter and hand held anemometers. Solar irradiance (global) is measured using a thermopile-based pyranometer. Daily rainfall is measured in an Octapent top 5 in (127 mm) diameter raingauge. Rainfall duration is measured autographically using a very reliable natural siphon gauge. An all plastic raingauge is used to collect rainwater for soluble and insoluble (particulate) constituents. Evapotranspiration is measured using a classical lysimeter set into grass near the raingauges. Hail is recorded by observation and use of a hailometer (see below for details). Dew and frost deposition is measured by micro-lysimeter and drosometer.

Early in 2011 an automatic weather station (AWS) was installed, based on a Davis VP 2 with the addition of a solar radiation sensor. The instrument was modified so that the raingauge, with tipping bucket mechanism, was on the ground with the rim correctly 30 cm above the ground surface installed adjacent to the standard MetO approved raingauge. The raingauge has a thermostatically controlled heater installed to melt falls of hail and snow. The temperature and humidity sensor screen is 4 ft above grass with the solar radiation sensor installed above. The remote anemometer is on a mast placed above the roof of the house 8 m above ground level. AWS data are logger by the Davies console and this communicates with a dedicated Toshiba netbook uploading to the website. At the same time a Davis Vantage Vue instrument, calibrated against standard instruments in Llansadwrn to ensure comparability, was set up at Gorwel Heights in Llanfairfechan (241 ft) to compare observations and investigate frequent strong damaging local winds off the mountains, Föhn effects and local microclimate.

In 2014 the calibration of standard thermometers and Davis AWS stations were checked using a Gemini Tinytag Plus 2 datalogger with external 'flying lead' thermistor probe with certificated calibration at 0C, 15C and 30C

For more information about this and other weather stations in the UK, see the Climatological Observers Link,  list of sites, or their new website here.