Dustfalls in Anglesey on 29 July and 1 August 2004
originating from extensive wildfires in Alaska and Canada. 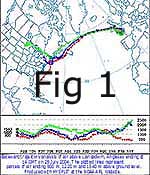 The day started bright but very hazy indicative of possible dust suspended in the atmosphere. The cloud thickened in the afternoon and there was slight rain from 14 GMT. The quantity of rainfall was unmeasurable, but it was sufficient to wet the ground. Examination of previously cleaned surfaces showed that there had been a deposition of fine light pinkish-grey dust (5YR 7/2M). On the 22nd there was Moroccan dust was off the Strait of Gibraltar on its way N past Iberia

and this might have reached here. But backward trajectory analysis (Figure 1), using the HYSPLIT 1 2 model on the NOAA ARL website, indicated other possible sources of dust along the east coast of North America, Nova Scotia and Newfoundland. Another trajectory suggested a source west of Lake Superior just south of the Canadian border. Around the 21 July there were reports of smoke crossing the border from Canada into the United States being blown along the coast into the Atlantic Ocean. After crossing the Atlantic the parcels of air circled over Brittany, and the north of the Bay of Biscay, where there could have been some mixing with dust-laden air from Morocco imparting a pinkish tinge. 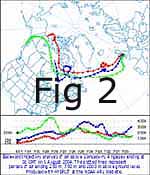 A larger amount of dust fell during the night of 31 July/ 1 August. The fine grey dust (5YR 6/1M) was seen on observing surfaces at 09 GMT on the 1st August. The dust was also observed by Mr Keith Ledson at his Red Wharf Bay weather station. Mr Ledson telephoned to say that he 'had only cleaned his car the day before and it was covered in the grey dust'. There were 2 showers of light rain during the night and the autographic rainfall recorder indicated falls at 01 and 05 GMT amounting to 0.2 mm. Backward trajectory analysis on 01 GMT (Figure 2), using the HYSPLIT 1 2 model on the NOAA ARL website, indicated possible sources of dust of the border between Alaska and Yukon Territory, and places eastward in northern Canada. A possible route from the Alaskan border over northern Canada, Newfoundland and south of Greenland is over 8320 km (5200 miles) to Anglesey. There are records of other longer distance transportation of dust. In a recent retrospective study 3 dust from China's TaklaMakan Desert was shown to have travelled more than 20,000 kilometres over a period of 2 weeks to reach the French Alps.

Wildfires in Alaska and northern Canada during June and July 2004

Fires have been raging across the continent from mid-June and have destroyed thousands of hectares of prairie, forest, sagebush and scrub. Hundreds of people have been evacuated from their homes and property destroyed. These events had received little publicity in the UK to date. The fires were started by lightning strikes that are a frequent occurrence in these territories at this time of year. But this year, in just a few days, the frequency and intensity of lightning was such that the fires were much more extensive usual. Early estimates suggested that fires numbered more than twice that seen in 2003 involving about 8 times the area.

Fires started in mid-June and by the beginning of July had burned more than 0.25 million hectares. Yellowish-grey smoke hung over the countryside and on 1 July, fanned by strong winds, fires were reported as moving at a rate of 5 km per hour. On 5 July a large plume of smoke and ash particulates were blowing eastward over Canada's Yukon Territory, generated by the large number of intense fires burning in Alaska. In the Terra MODIS true-colour image the smoke is the darker shade of grey distinguishing it from both clouds, snow and ice. One of the largest fires was near Fairbanks, Alaska's second largest city.

This one started on 13 June and has burned more than 250, 000 hectares. At the Fort Knox gold mine, a few miles northeast of Fairbanks, 200 workers had to leave. By the 5 August the fires had burned more than 0.5 million hectares, but there were then signs that the fires were coming under control.

With smoke continuing to drift eastwards from Alaska fires developed in Canada during July adding to the smoke pollution. On the 19 July there was a plume of smoke blowing off Newfoundland out into the Atlantic Ocean. Fires were still burning across Canada as the trajectory parcels of air passed over. The parcel that arrived at 2000 m on

the 1 August was on the 25-26 July indicated as being east of Lake Athabasca. Here dozens of fires (indicated on the MODIS image by red spots) were burning generating more smoke and ash. The plume flowing from the northwest, the near the line of the trajectory, was coming from fires burning in the Northwest Territories.

The fires caused widespread pollution across Canada. The MOPITT image 5 indicates levels of carbon monoxide in the lower atmosphere. It is a good tracer for these events because it is produced following combustion of biomass materials. It can be measured by the MODIS instruments onboard NASA's Terra and Aqua satellites. Red and yellow colours indicate high levels of carbon monoxide; light and dark blue low amounts. The image covers 12 to 26 July and includes the period of time when trajectory air parcels were in the vicinity. Carbon monoxide is seen well out into the Atlantic Ocean past Greenland on the route to Anglesey.