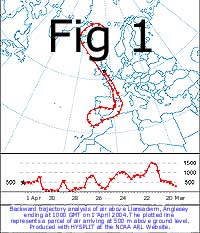 After a few spots of rain at 0915 GMT there was light rain at 1000 GMT that washed out traces of fine pinkish-grey coloured dust. Pressure 1002 mb was falling slowly as low (982 mb) was tracking N just SW of Ireland. There was a trough lying across the UK from Aberystwyth to the Wash. Trajectory analysis, using the HYSPLIT 1 2 model on the NOAA ARL website, indicated possible sources of dust along a line from north-western Morocco, near the High Atlas Mountains, and along the coast of northern Algeria. Dust was being raised on the 29th March (see the image from the Moderate Resolution Imaging Spectroradiometer (MODIS) aboard NASAs AQUA satellite 3) close to the indicated trajectory and being blown northwards off the deserts of N Africa into the Mediterranean. The dust-laden parcel of air continued along the coast of Algeria before passing near the Balearic islands. It then crossed central France to reach here 500 m above ground to be washed out in the rain.

Inspection of Met Office 6-hourly analysis charts 4 showed that on 19 March there was a deep low 986 mb over Belfast, Northern Ireland, that was part of a large low-pressure complex enveloping the UK, offshore SW Iceland (975 mb), N Norwegian Sea (987 mb) and offshore S Norway (990 mb). Pressure was high 1038 mb over the Azores. There was a strong SW'ly airflow across southern Britain. By the 23rd the wind had turned NW'ly with an airflow to the N of Iceland coming from the Norwegian Sea. At the same time it was unsettled in the Mediterranean with shallow low pressure 1006 mb developed over the Ligurian Sea and, on the 24th, 1007 mb W of Iberia. This gave a NE'ly airflow across France and Spain.

From the 25th to 27th pressure gradients were slack over the Mediterranean until the 28/29th when paired lows W (1001 mb) and E (998 mb) of the Gibraltar Strait resulted in a stronger airflow from Spain via the Atlantic to N Africa. On the 30th the lows moved NW and dust-laden air from N Africa was flowing over the Mediterranean Sea. By noon on the 31st a complex low pressure system in the Atlantic, 993 mb W of Cape Finisterre and 992 mb W of Ireland, gave a S'ly flow from N Africa across the Mediterranean and SE'ly through France to the UK. At midnight on 1 April high pressure 1008 mb was established along the breadth of N Africa while low 981 mb SW of Lands End was tracking north. There was a SE'ly flow of air across the UK that brought the dust.

Trajectory analysis indicated a northern Moroccan origin for the dust, suggesting a most interesting route for a parcel of air, arriving over Llansadwrn on 1 April 2004 (Fig. 1). Beginning 300 m over the Norwegian Sea 64°N at 10 GMT on 19 March 2004 it moved N then NW to 71°N to pass near Jan Mayen island before turning SW through the Denmark Strait to circle the NW coast of Iceland from 12 GMT on the 21st to 00 GMT on the 22nd. After crossing Northern Ireland at 18 GMT on the 22nd it was over South Wales, at 00 GMT on the 23rd, then crossed SW England and the Channel and was over Brittany from noon. Continuing through France it crossed the Pyrenees into Spain in the afternoon of the 24th to be over the Mediterranean coast where it lingered near Valencia on the 26th. Turning W it crossed the Sierra Morena (5500 ft) crossing into Portugal on the 27th and reached the coast near Lisbon at 06 GMT on the 27th. After doing a sweep over the Atlantic N of Madeira it was over the Moroccan coastline S of Casablanca about 100 m above ground by 12 GMT on the 28th. Then rising to cross the High Atlas Mountains (13000 ft) it descended to move along the N coast of Morocco on the 29th at 06 GMT and Algeria until 00 GMT on the 30th before turning NE. Passing the Balearic islands to the W it turned NW crossing into France before midnight on the 31st. Moving over central France it was over the English Channel at 18 GMT on the 31st to reach here 500 m above ground on the 1st April.

Trajectories for air arriving at 750 m and 1000m above ground indicate origins N of the Atlas Mountains in Morocco.